Hello to everyone. I hope you and your loved ones are holding up in these trying circumstances. I won’t tell you to be chipper or keep your chin up: I will tell you that I wish you all the best.

Things have been exciting here: I am holed up out of NYC with a dear friend. Since the shop is my only form of income, and most of it is in Brooklyn, I have been scrambling to get ducks in a row. I am safe: I am sheltering in place at home. I have arranged mail pick-up once a week, and I sew in my bedroom, so I am able to keep going for the time being. 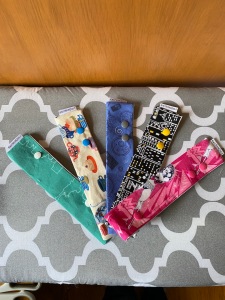 I will be focusing on drawstring bags and DPN cases at first. If you have a particular request, PLEASE tell me. My contact form, Instagram DMs, Twitter DMs and email are all open to you, dear customers. If I have access to the fabric in question, I will be happy to sew up a custom bag at no additional cost. (I do hope you’ll understand that my access to fabric is limited at the moment, due to circumstances beyond my control.)

Because I believe strongly in putting my money where my mouth is, KnitSpinQuilt will continue to donate 15% of item prices to charity. In 2020, I have chosen the Ali Forney Center, a charity that works to alleviate homelessness in LGBTQ youth in New  York City. The Ali Forney Center cannot close under current circumstances, because it provides housing to at-risk youth, and is in need of support now more than ever.

Please keep safe, keep indoors, and keep on keeping on. This is going to be hard, but the only way forward is through.

Hello, everyone! It’s been quiet here for a while, because I’ve been keeping very busy.

I had a lovely three months in England from February 2019 to May 2019, and after coming back to the USA, I re-opened the shop, and was honored to share a booth with 1 Geek 2 Craft All at Indie Untangled.

In 2019, thanks to income from KnitSpinQuilt’s Etsy shop and show sales, I was able to donate $775 to RAICES Texas and $100 to Planned Parenthood. 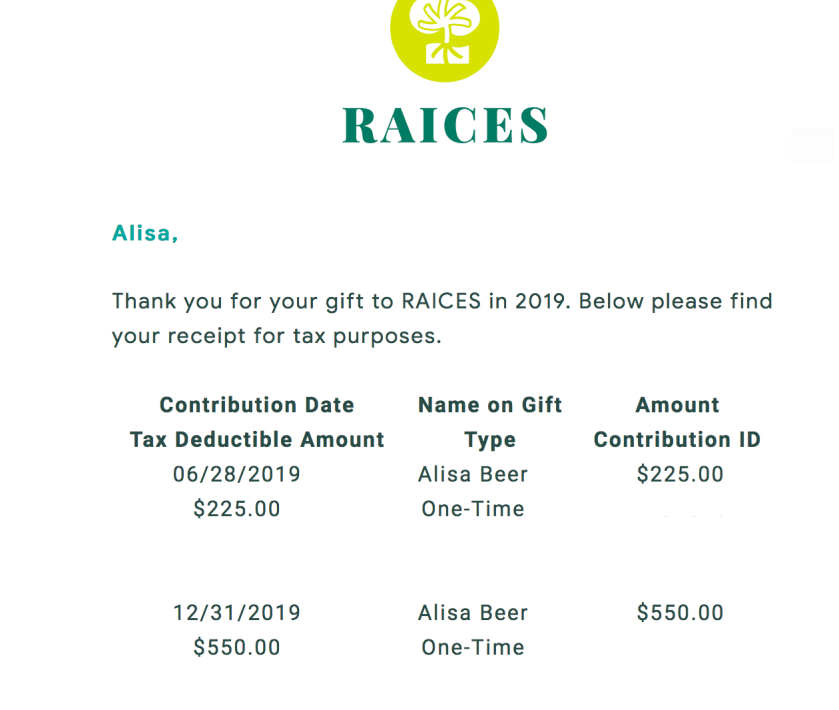 It’s incredibly important to me to be able to put my money where my mouth is: supporting issues of justice and equity for all persons, including and focusing on those who are marginalized by and victimized by our current administration’s policies and institutionalized racism in America, where I happen to live. So 2019 was the year I donated to migrant and refugee justice and to reproductive justice.

I’ll post again soon with plans for 2020, because my donations will be going to a new charity.

Best wishes to all as we move onwards into the future, no matter what it may bring.

Thank you to everyone who came by to say hello at Vogue Knitting Live in New York City! It was a whirlwind of a weekend, and great fun, even if it was a bit overwhelming at times. If I was distracted, I apologize: there was an awful lot going on!

It’s been a busy winter here in Brooklyn! I have received funding from my graduate program to go abroad for three months to do research on medieval libraries!

This means that I’m going to have to shut down the shop from February 22 to June 1, 2019 — there’s no way for me to fulfill orders from the archives in London, and as a one-woman operation, I don’t have anyone to do it for me.

If you’ve been on the fence, now is your chance to get something before the shop closes for three months. (While I’m gone, those of you in New York can still find my bags and stitch markers at Knitty City and Woolyn in New York City, and at The Endless Skein in Cold Spring, when it opens!)

Before I go, though, I am excited to have some box bags back in stock. These bags are fully lined in white or low-volume print fabrics, have a handle long enough to loop over your wrist or (my favorite) to attach to a clip and hang from another bag, and use long-pull zippers with broad blunt teeth, the better to not snag your yarn. 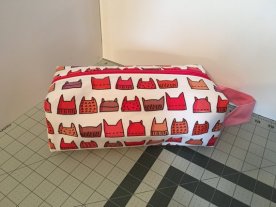 There are also a variety of sock-size drawstring bags and shawl/sweater-sized drawstring bags: the medium (sock) bags will hold two skeins of yarn, but are most often used for socks; the larger bags are good for larger projects (though perhaps not your bulky sweater-coat, as they top out at about four skeins of yarn unless you shove). 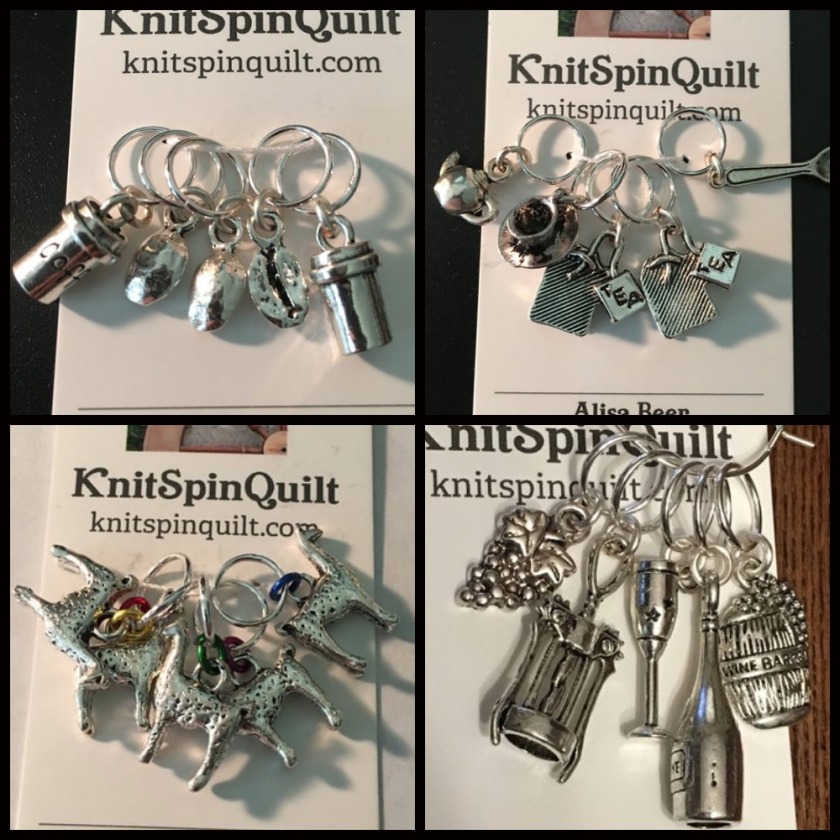 I’m excited about archival research, and can’t wait to share pictures of England with you on my Instagram while I’m gone: @knitspinquilt

Remember — the last day to place an order before I leave is February 22!

I can’t wait for Friday — I’ll be sharing booth 23 with One Geek to Craft Them All and LexiCorp Knits at the Indie Untangled trunk show.

If you’ll be there, drop by and say hi!

I’m prepping up a storm right now, because I’m delighted to announce (belatedly!) that I will be a vendor at the Indie Untangled Trunk Show in (eeek) less than three weeks.

Find me at booth 23 with One Geek To Craft Them All! 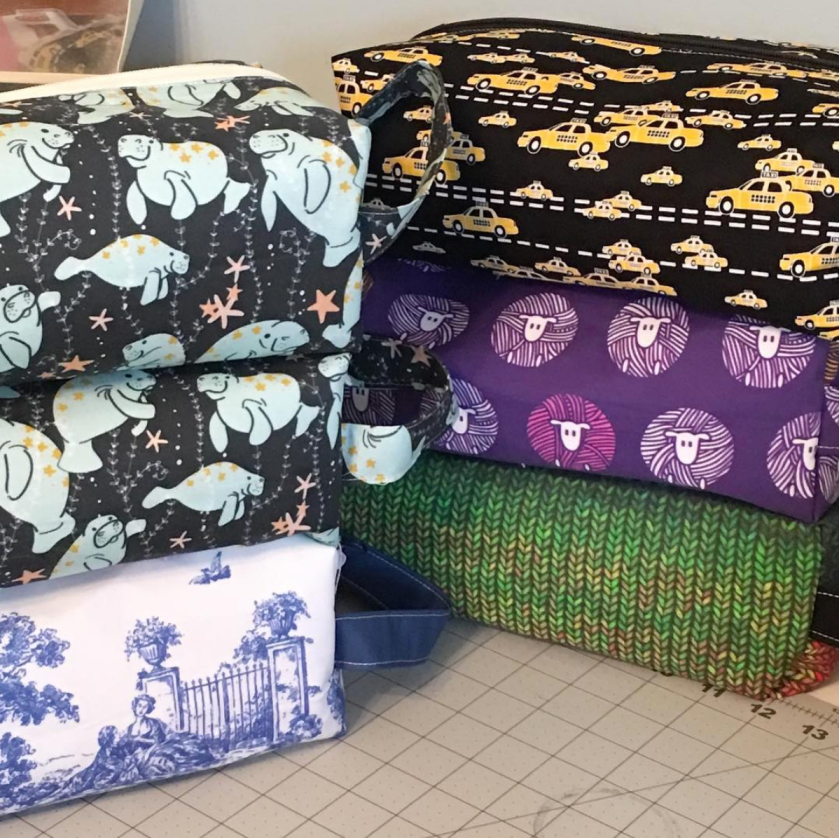 I’ll also have a lot of drawstring bags, which I’m still frantically sewing up:

Come by and say hi! And watch this space later this week for a very exciting announcement!

KnitSpinQuilt is branching out into collaborations with yarn dyers!

This very first kit is a project bag, yarn, and pattern collaboration with Yarn Over New York and Gannet Designs. Customize it and make it exactly what you want: you get a project bag, one or two skeins of yarn, a shawl pattern designed for this yarn, and a stitch marker. 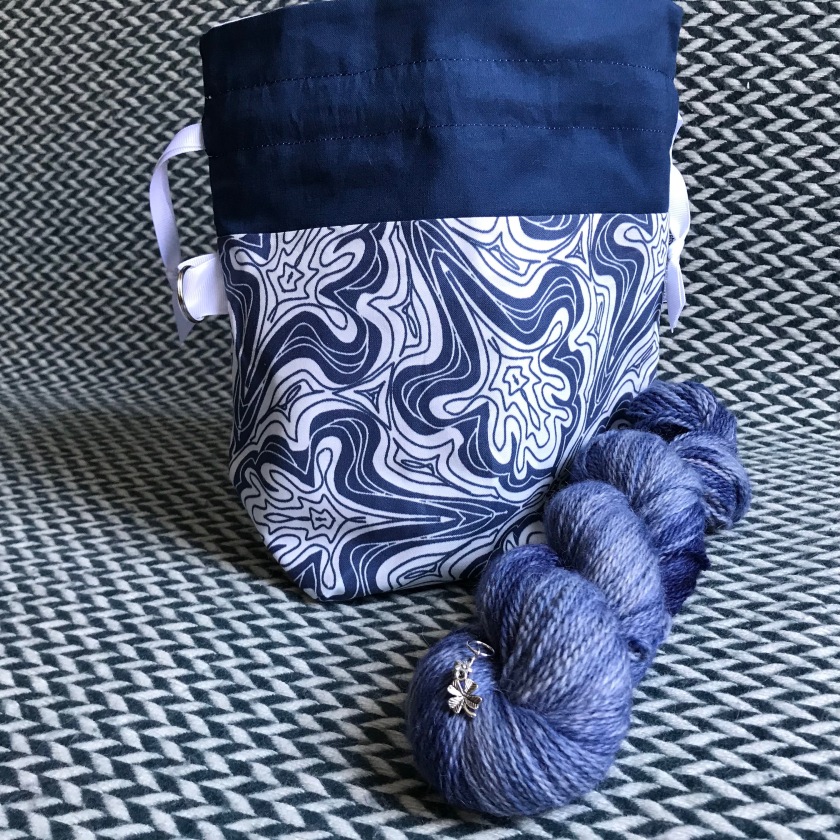 The project bag – a medium drawstring project bag sewn by Alisa of KnitSpinQuilt – is made from a fabric whose pattern was designed by Naomi of Gannet Designs. The lovely, lovely yarn is dyed by Jessie of Yarn Over New York.

You get to customize the kit in several ways. We’re offering it in three different colors (green, blue, and purple) and two different yarns: Times Square Sock (merino/nylon) or Astoria (alpaca/merino). Choose your color, choose your yarn base. Finally, choose whether you want one skein of yarn, or two skeins of yarn. 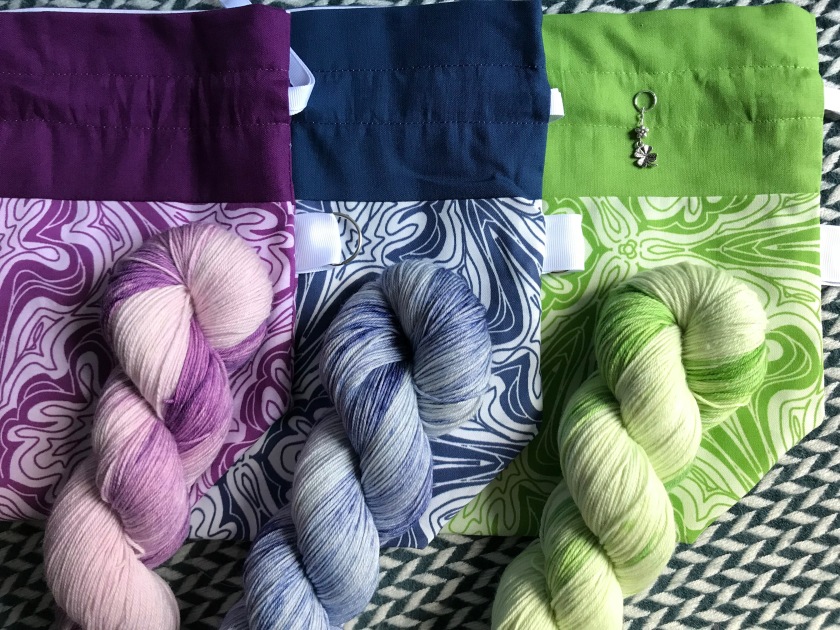 The kit comes with a pattern for a brand new shawl: the Semiramis Semicircular Shawl, designed by Alisa of KnitSpinQuilt using Gannet Designs lace patterns. You can make a shawlette with one skein of yarn, or a large shawl with two skeins. You’ll also get a custom matching stitch marker as a little bonus. 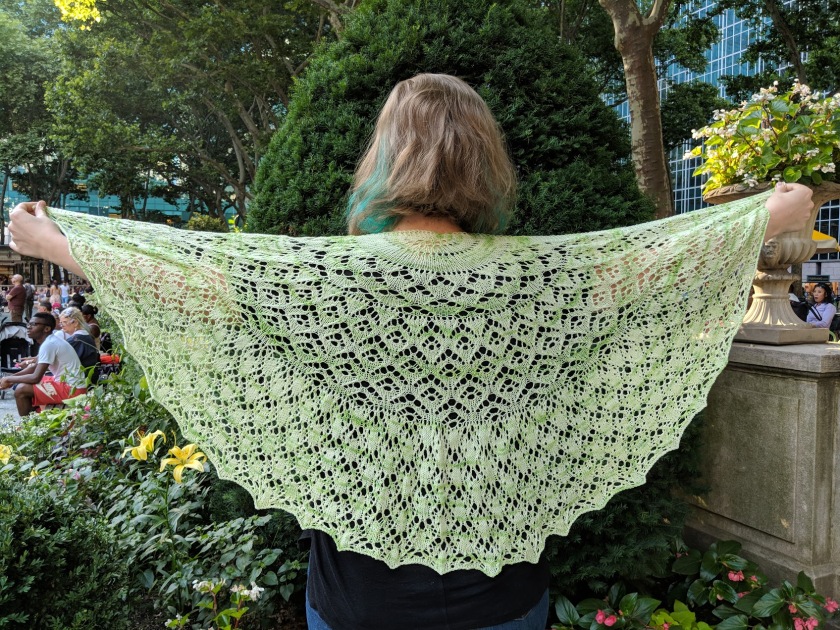 You can pre-order the kit at Yarn Over New York’s new website. Orders will only be open for two weeks, and the kits will ship by August 20. You’ll receive a Ravelry download code for the pattern as part of your purchase — don’t have Ravelry? We’ll print it and mail a physical copy of the pattern to you with the yarn — just make a note in your order.

One of my favorite authors, Mary Robinette Kowal, is releasing two lovely books in the Lady Astronaut of Mars universe: The Calculating Stars, and The Fated Sky.

I cannot wait to listen to the audiobooks of these books: Mary is an embarrassingly talented writer, and has been tweeting all kinds of amazing details about her research at NASA for the books.

So when I saw this fabric, I knew I had to make bags inspired by the books: 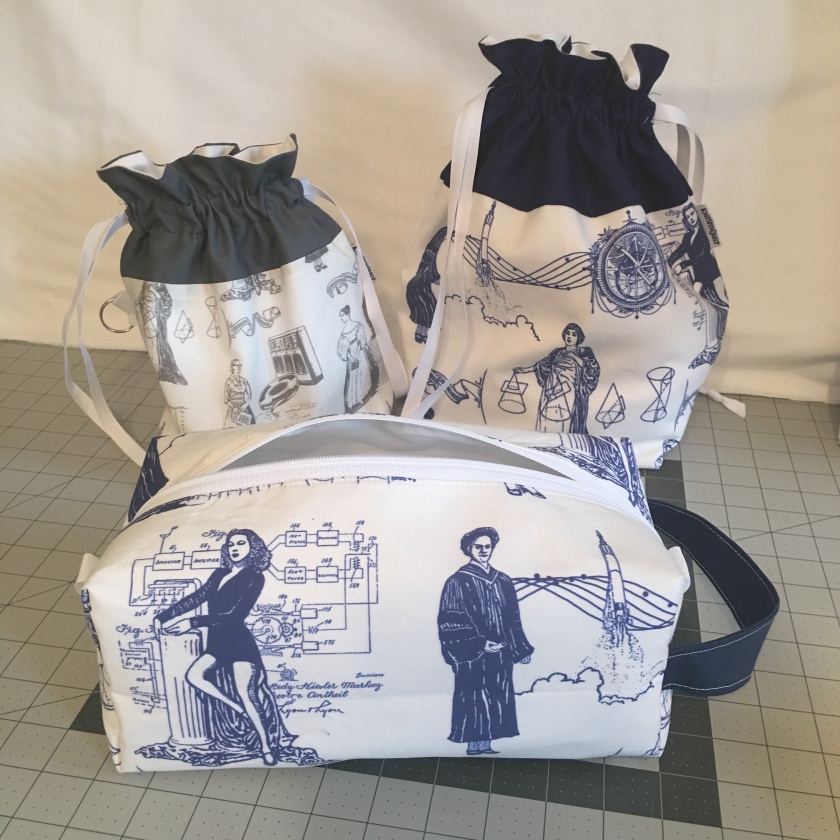 These bags are available in my Etsy shop, and as always, 30% of the ticket price will be donated to the Hispanic Federation.

I usually talk about crafting on this blog, but I thought it would be a good idea to talk about why I choose to donate 30% of my Etsy shop’s proceeds to charity — and why I’ve chosen the charity I’m currently donating to. (It’s the Hispanic Federation and specifically their Hurricane Maria disaster relief efforts.)

Many of you will remember Hurricanes Harvey, Irma, Jose, and Maria, all of which hit in 2017. There was a huge push for recovery in the continental United States, but the damage from Maria, in September of 2017, was worst in Puerto Rico — which is part of the United States, albeit not a state.

Now, nine months on, the recovery efforts are hobbled and struggling, federal funds aren’t being disbursed in a timely fashion, the estimated death toll of 4,600+ is more than double that of Hurricane Katrina, and Puerto Rico is still getting far less press attention and funding.

So here’s some reading, in case you’re interested in what’s going on.

The Guardian’s account of Hurricane Maria’s death toll and another article that details the fact that Puerto Rico is suing to get a more accurate death count — because the federal government is still insisting that only 64 people died, despite mounting evidence to the contrary.

A bipartisan commission is being called for to investigate federal disaster preparedness in the case of Hurricane Maria.

Even FEMA’s own records tell a different story than what is being pushed by the federal government. NPR says that FEMA is blaming the storm, rather than it’s own lack of preparedness, despite an appalling lack of pre-storm prep.

I chose the Hispanic Federation as my charitable recipient this year because of its strong record in working closely with communities on the ground, its good charity navigator score, and the fact that it has a history of working in Puerto Rico, which means infrastructure already in place.

Check out its work in Puerto Rico Disaster Relief here.

As always, I’m in graduate school, and I’m not stipended anymore. I literally can’t donate on my own, but I can turn my skill into money to donate, if you all help me out by shopping with me.  I know there are a lot of options out there for stitch markers and project bags: more every day, it seems like, and a lot of really awesome makers to be discovered.

In case you’re wondering, I’ve done my first donations of the year through Network for Good — Google is matching donations to the Hispanic Federation right now at a 1-for-1 match.

That $500 that you all helped me donate so far this year will be matched, and will be $1000 donated in total, because Google is matching up to $2 million, and as of the time of this post they’re not there yet.

And as always, thank you all for helping me put my money where my mouth is.