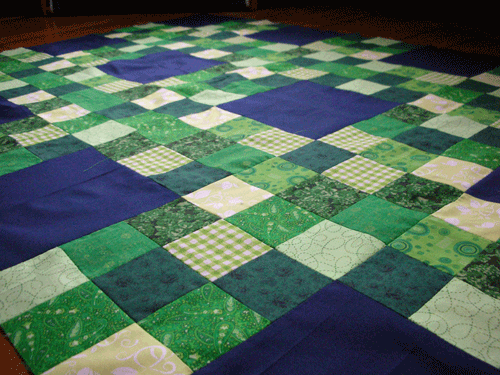 This is the Nine-Patch Lattice Quilt from Oh, Fransson!, Elizabeth Hartman’s quilting blog. I stumbled across her tutorial on how to make crazy nine-patch blocks a year or so ago and thought it was genius. So when I got the urge to try my hand at quilting something that actually had a pattern, I thought of the tutorial, visited her blog, and found the Nine-Patch quilt. The practice blocks I did were mock-ups for this project. 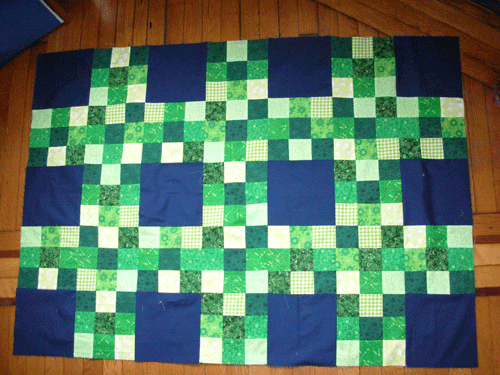 I didn’t end up going for crazy blocks, because I preferred the lattice effect of symmetrical squares. I strip-pieced the blocks, which made everything much faster and easier, and aside from learning that I can’t sew a scant 1/4″ seam without a guide of some kind (and even then, I sometimes manage to sew a slightly wider seam, just enough to throw things of a teeny bit overall), it went very smoothly.

I used nine fat quarters I’d picked up at a Joann Fabrics to use together. Originally I was going to use the green sheet I used in the test pillow squares as sashing, but something about it didn’t quite look right to me. So when I went down to Brooklyn General to pick up a 6×24″ quilting ruler, I brought along one of the squares, and laid it against some of the fabrics they had there. This is Kona Cotton in Navy (if I recall the color correctly: a dark blue, in any case) and I really like the way it sets off the greens.

One of my favorite things about this pattern is the back:

The little squares remind me of stained glass windows, glowing in the darker wall of blue fabric.

One thought on “Nine-Patch Lattice Quilt”