First of all, here’s the rather pathetic progress I’ve made on the Mixtape quilt since the last time I posted about it:

I’m looking forward to finishing it up, but I think it’s going to have to wait until the end of the semester: something about the potential finished-ness of it once I sew in the long sashing strips is giving me pause.

In the mean time, however, I’ve changed up the fabrics I’m using for the Block of the Month quilt: 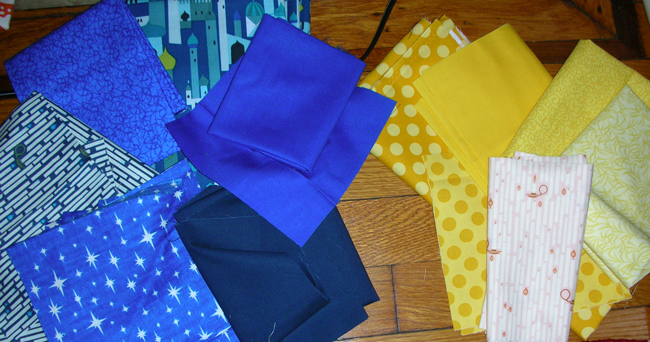 The new one in the dark blues is the cities print from 1001 Peeps; the yellow dotty ones are Ta Dot by Michael Miller, which I’m fond of.

Here the light blue has benefited from the addition of some Ta Dots as well.

And because just cutting them was putting far too much temptation in my way, here are two blocks that I’m almost ready to sew together:

This is the March block, and I think I’m pretty okay with how it looks.

This is the January block. And for this one, I could use some advice: which orange? Or should I pick something else entirely from the fabrics I showed above? I’d love a second (or third, or so on!) opinion, because I’m really not so sure about this one as it sits now.

2 thoughts on “Mixtape progress and Block of the Month question”