In 2012 I started quilting seriously, started blogging, met a whole bunch of really lovely people and learned tons from advice and tutorials and quilt-alongs, and finished a lot of small projects and several quilts, including one that isn’t featured in this mosaic.

In 2013, I’ll be joining the Inspire circle of do. Good Stitches (which I’m really looking forward to) and trying my best to keep up with the Pile O’Fabric Skill Builder Block of the Month in hopes of learning how to sew curves at the very least. And ideally, I’ll be a little bit better at keeping up with this blog during the spring semester than I was this fall.

My new free-motion quilting foot arrived in the mail last week, all metal and (so far) much sturdier. I had Friday off, and took advantage of the time to organize my fabric stash and finish up my Mixtape Quilt, from Elizabeth Hartman’s pattern. I made the “Favorite Songs” style, in its largest size: the lap-quilt of 8″ blocks, which ended up 62″/62″. All posts about it can be seen by clicking the “mixtape quilt” tag on the right sidebar.

I had already quilted about half of it (before my previous free-motion foot broke) and started on it with the previously quilted sides neatly rolled and folded to keep them out of my way. I did my best to keep it all in neat place so that it was smaller, which did make it a little easier to move around, though it was surprisingly heavy.

But by about halfway through today’s quilting, I had given up on keeping the outer edges folded, and only rolled the edge that was under the sewing machine’s arm. I got a little bit better at manipulating the quilt as I went along, and at figuring out where to place my hands while I was moving it — left hand to the back and left of the needle, right hand right and slightly to the front (that is, closer to me), moving in tandem. I think the quilting of it improved a bit by the end. Overall, I’m very proud of it: it’s the first thing I’ve ever free-motion quilted, and it’s the largest quilt I’ve made so far, at 62″x62″. It could be a bit awkward to do something larger than this, because it got difficult to manipulate too closely with half the quilt folded up under the arm of the machine.

Once I’d quilted all of it and trimmed the borders, I machine bound it in one of the fabrics I used in the quilt. It’s a slightly heavier weight than some of the other fabrics, which may stand up to wear and tear a little bit better than a lighter fabric. Since this quilt is going to a 3-year-old boy, durability is definitely a concern.

Once I’d finished it, I tried to take a picture indoors. That was … not entirely successful: I had to hang it up over the railing and take a picture from the stairs. It ended up being a bit of an odd angle:

Thankfully, it was beautiful outside, so I took it out to the back yard, and hung it from the back porch:

It may be feverishly hot outside today, but it made for nice picture-taking.

I’m so pleased to have finished this project, and I can’t wait to see the look on my friend’s face when I give it to her and her son.

I have the house to myself this weekend, which means I was free to set up my sewing machine on the kitchen table for Saturday afternoon and most of Sunday where I’d have plenty of space to move the quilt around and manipulate it, in addition to the benefit of being able to sit at a normal height table. (My usual setup is on a coffee table, which isn’t quite ideal for long stretches of sewing.)

I made my way through 1/6th of the quilt before my free-motion quilting foot snapped my needle, and I spent the next few blocks of it keeping a sharp eye on the foot, as it gradually got chipped away by the needle going up and down. I had to cut away part of the clear foot to keep the needle from breaking again, which worked for only a little while longer.

Then the foot skewed even further, and it became clear that this just wasn’t going to work: the shaft of it was cracked.

I got approximately halfway through the quilt, rolling it up on one side as I went along.

But I only got about halfway through the quilt before the foot broke entirely. I won’t be buying this brand again: it was a waste of time and money. (For the record, if anyone else wants to avoid it, it was this one, which I bought on Amazon.com)

Still, I’m pretty happy with the quilting so far: it looks like I basted well enough to avoid puckering. The recipient asked for zig-zag lines, which I think are working out all right. Seeing as it’s the first time I’ve ever free-motion quilted anything, I’m not unhappy with it — just with the photography today.

It feels like a long time since I’ve posted about this, but the mixtape quilt I’m making for a friend’s son is all basted and ready to quilt!

I love the way the blocks are arranged: if you look closely, every set of four (2×2) has one from each color group. I’m always impressed when people write patterns that lay blocks out in regular but not immediately obvious ways, so this pattern has been a lot of fun. 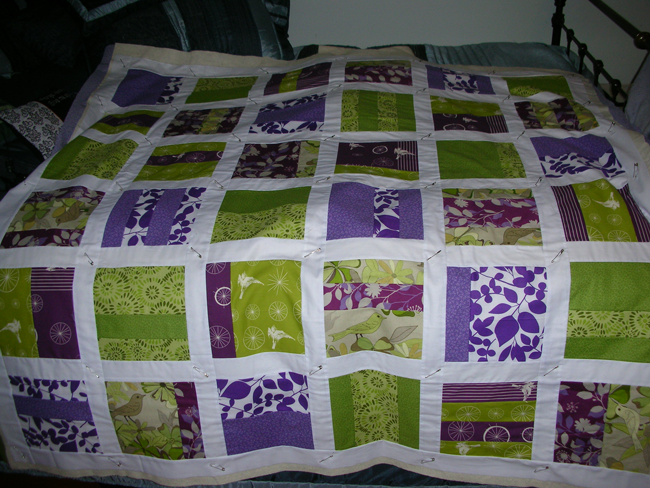 The back is fairly simple: just a strip of white separating two of the small prints used on the front.

One thing I’m really pleased about is the fact that the stripe on the back lines up almost perfectly with one of the strips of sashing on the front of the quilt. This will really only ever be visible when the quilt is folded partway, but it makes me happy. 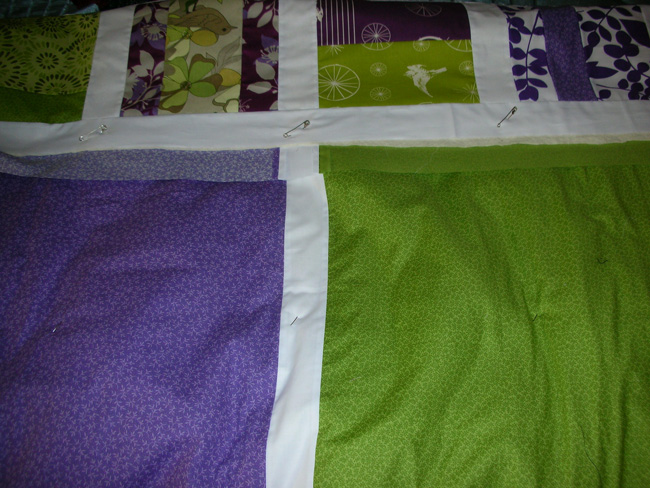 For right now, it’s basted with pins at the corners of the blocks, but I’m not sure that’s enough. Anyone with more quilting experience: is that enough, or should I pin the centers of the blocks, too? They’re eight inch blocks. I’m torn, because I don’t want to have to quilt around even more pins, but I also don’t want things to shift about too much. Advice would be wonderful. 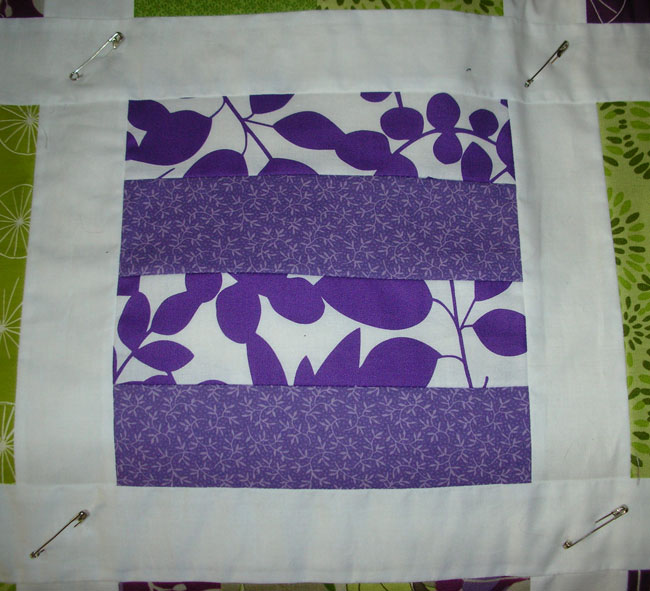 Finally, I’ve done up two samples of ways I might quilt this sucker. They’re done in black thread against a light background to make the stitches more obvious — it also reveals that I probably need to adjust the tension on my machine a little bit, since you can see the white thread from the other side poking through a bit here and there.

I’m not really sure how to quilt it — loops or zig-zags are probably easiest, as far as free-motion quilting is concerned. I’ll have to talk to the recipient and see what she likes best, and go from there.

As for other projects, I’ve been chugging along on the blocks of the month, but I just made my first large piecing mistake, so I’ll leave that (and its fixing) to next week.

First of all, here’s the rather pathetic progress I’ve made on the Mixtape quilt since the last time I posted about it:

I’m looking forward to finishing it up, but I think it’s going to have to wait until the end of the semester: something about the potential finished-ness of it once I sew in the long sashing strips is giving me pause.

In the mean time, however, I’ve changed up the fabrics I’m using for the Block of the Month quilt:

The new one in the dark blues is the cities print from 1001 Peeps; the yellow dotty ones are Ta Dot by Michael Miller, which I’m fond of.

Here the light blue has benefited from the addition of some Ta Dots as well.

And because just cutting them was putting far too much temptation in my way, here are two blocks that I’m almost ready to sew together:

This is the March block, and I think I’m pretty okay with how it looks.

This is the January block. And for this one, I could use some advice: which orange? Or should I pick something else entirely from the fabrics I showed above? I’d love a second (or third, or so on!) opinion, because I’m really not so sure about this one as it sits now.

I’ve done a lot of piecework and blocks recently, but the project that’s taking up much of my time right now is one that hasn’t shown up here at all yet!

This is partially because I haven’t got the sashing material yet for my Simple Math quilt, so that’s on the shelf for a little while. (To pick out that fabric, I’ve got to find a time both its recipient and I are free to go to a quilting store, and that’s going to take some doing between our respective schedules.)

Fortunately, I haven’t had to sit on my hands. Instead I offered to make a quilt for a friend’s son. I sent her a handful of patterns, and I have to admit I was really pleased when she picked Mixtape Quilts, because I’ve been eyeing it for a little while. We went to The City Quilter together, and I read to her little boy while she picked out fabrics. It was really fun watching her duck from rack to rack accumulating fabrics and pairing them off.

It’s all purples and greens, though the colors don’t come through true in these pictures:

We bought white material for the sashing, but after I’d laid all the blocks out, it occurred to me that maybe a darker sashing fabric would be a good idea for a small child? So I laid out what purples and greens I had (solids, that is) under some of the blocks: 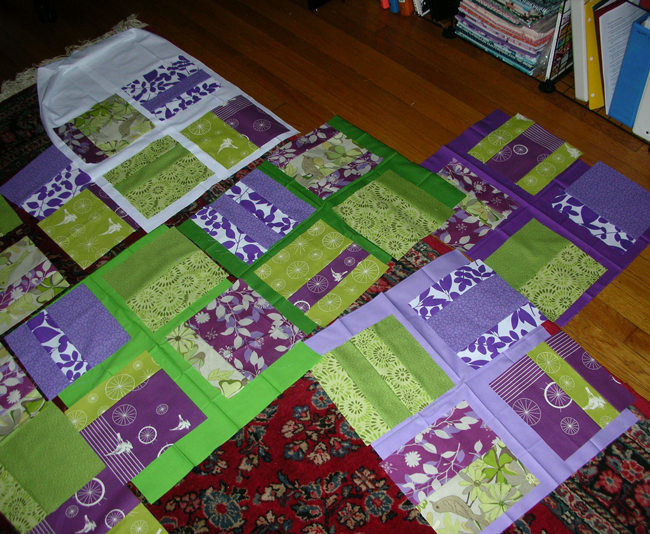 (The lighter green isn’t quite that NEON in person…)

What’s funny is that everyone who saw it had a different, very strong opinion. Definitely NOT white. Definitely purple. NEVER green. Maybe a different green. NOT purple. It was a complete failure of crowd-sourcing decision-making: no consensus at all. The recipient went with white in the end, so I’m working on sewing it all together with the sashing right now, which ought to keep me busy for a little while.