Linking up to WIP Wednesday at Freshly Pieced, and to the Small Blog meet-up at Lily’s Quilts. If you’re stopping by for the first time, you might be interested in learning more about me, or in looking at my finished quilts. If you’re interested in any particular kind of project, check out the tags in the lower right sidebar.

This is a remarkably picture-poor post, largely because it’s a to-do-list of the various projects I have in progress right now. Never let it be said that I’m a monogamous crafter? Projects are arranged in (sort of) order of least-work-to-be-finished.

General To-Do List:
-Tape a large piece of batting up on the tops of my two really tall bookcases and pin things to it, in an attempt to create something that sort of resembles a design wall
-Clean crafting stuff off my desk so it’s actually usable for schoolwork.
-Likewise clear books out of crafting space so I can actually sew w/out moving piles of stuff.

Test-Drive Mabel Bag To-Do List:
-Be proud of inside pockets and the fact that the lining actually (mostly) fits inside the exterior of the bag.

-Attach strap and strap extender once bag hardware arrives in the mail
-Sew around the opening, matching lining to bag outsides
-Turn it inside out to end up rightside out & sew up lining bottom
-Iron (and maybe topstitch?) for a finished, professional look

Mini Dresden To-Do List:
-Back of mini Dresden quilt: alternating tumblers in a variety of fabrics across a brown background: figure out the right size of tumbler
-Finish the corner fans of the mini-Dresden quilt, and arrange so that they will look all right after binding
-Binding of mini Dresden quilt: probably in a darker brown, but possibly in a scrappy series of colors. I’m torn between wanting to make it more cheerful and wanting the focus really to snap to the middle medallions
-Quilt & appliqué!

-Re-jigger design to figure out yardage needed to make a double-bed quilt out of slightly smaller blocks
-Pick out sashing & binding fabric (next week, with L, hopefully!)
-Cut sashing
-Piece a scrappy border, alternating white and blue
-Piece entire top (ugh!)
-Figure out backing for the quilt (!?!?!)
-Sandwich, quilt, bind
-Give to mom on October 18

-Cut the black 1 1/2″ strips for the “frames”
-Order more Kelly green and cut green strips for “borders”
-Cut about a dozen more organizing cards, number all 36 of them from 1-36
-Start laying out all 36 blocks, figuring out which ones need to be oriented vertically and which horizontally
-Piece blocks
-Arrange blocks on (hopefully!) “design wall”
-Piece top & figure out backing and binding
-Baste, quilt, bind

Spinning To-Do List:
-Get cracking on that yarn for mom’s sweater. Finish it up by December, for a Christmas present.
-Spin exclusively from stash: maybe some merino/yak? Or the lovely greens from MA Sheep&Wool.

Apologies for the silence here! I was wrapping up the semester and then at the medieval congress in Kalamazoo, and that all added up to not very much getting accomplished, craft-wise.

Today’s post is a knitting round-up. I tend to have a few projects going on at a time (this is probably evident in how I’m going about starting quilts right and left) and I have a couple too many knitting projects going on right now. Hopefully this will incentivise my finishing one or two of them.

There are socks for my mother, which are this close to being done: 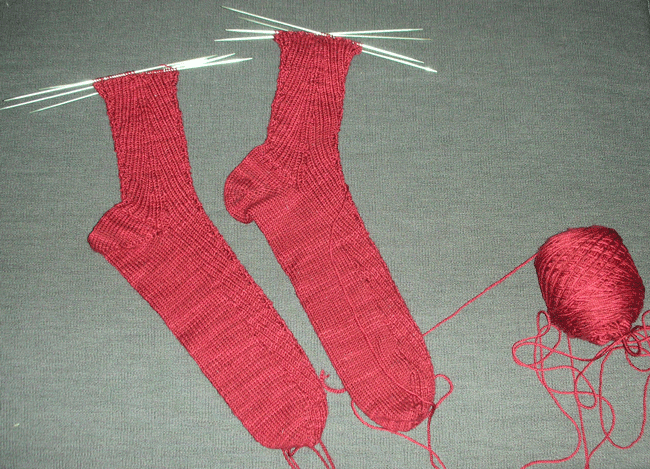 They’re actually a lot of fun: the yarn is Malabrigo sock, which I’d never knit with before – it’s a joy. The pattern is 2k-2p-inside-out, and I really like the way it forms little ribbed chevrons down the foot.

Then there are the blue socks for me, which are the only socks I’ve knit for myself in at least a year (what can I say, I have a family that appreciates hand-knit socks!). I”ve just started the second one, and I have about three inches of it — it’s slow going, but it’s good subway knitting.

They’re in Claudia Hand-Paints, which I love knitting with, but always knit from toe-up, because its skeins are on the small side, and my feet? Well, they’re on the large side. Better safe than sorry, no matter how easy it is to call different-colored toes a “design feature.”

There’s also a red sweater that I started two Novembers ago as an attempt at National Sweater Knitting Month — I got almost all of it done, realized my gauge on the bottom half of it was wrong, ripped it all out, and haven’t picked it up again for ages because it’s so disappointing to have to re-do so much work. It doesn’t get to have a picture, because I don’t love it enough right now. Also because the red yarn photographs really badly in artificial light.

I have two projects that are so close to being done that, apparently, they have encountered Zeno’s Paradox and will now never be finished. I started to teach myself how to knit entrelac last summer, got almost to the point where I’d have to bind off the scarf, and completely lost interest. I also knit a baby sweater for my little cousin (the same one who got the ladybug quilt) and didn’t finish it in time for her to still be small enough to wear it. Hopefully I’ll finish at least one of them over the weekend, and be able to post them next week. I figure someone I know has to have another baby eventually, so the sweater can just lay in wait for that. The scarf, though, is probably going to be re-purposed as a pillow, since it’s too wide and short to make a reasonable scarf.

Finally, there’s the “I have the brainpower of a really small rock right now” project: 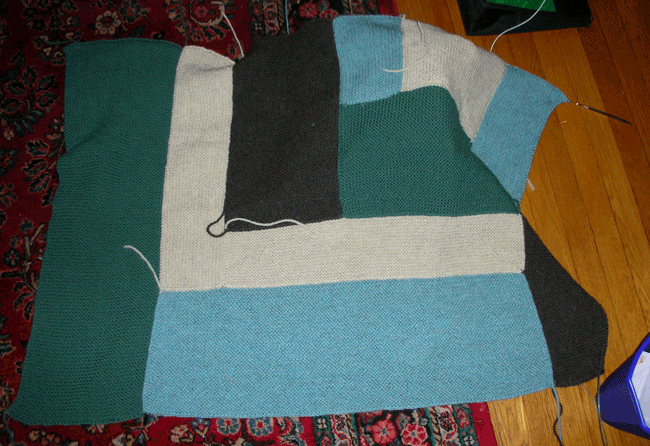 It’s the Log Cabin Baby Blanket from Mason-Dixon Knits, done in Cascade Eco Wool and Cascade Eco Plus (which is the same thing, only dyed all kinds of colors). It’s great for watching television or sitting in the car, because it’s all garter stitch, and there’s no thinking other than stopping once in a while to find out you still have way more ridges to knit before you’re done with that block. I love that the blocks are asymmetrical and the pattern doesn’t expand in a traditional log cabin fashion: I can’t wait to have this finished and be able to curl up under it, though at the rate I’m knitting, I’ll finish it sometime in June.

I think that’s all the projects I have going at the moment. Wednesday, back to quilting!