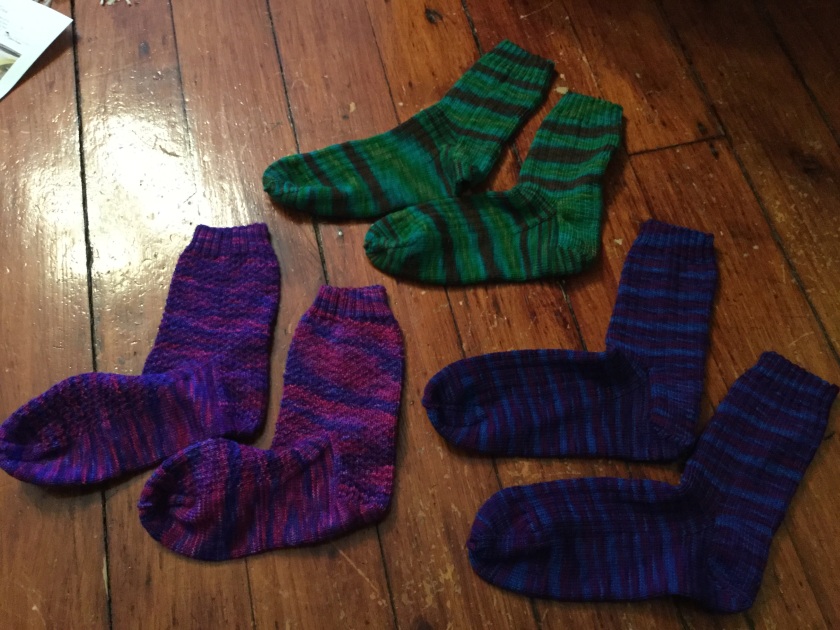 In 2012 I started quilting seriously, started blogging, met a whole bunch of really lovely people and learned tons from advice and tutorials and quilt-alongs, and finished a lot of small projects and several quilts, including one that isn’t featured in this mosaic.

In 2013, I’ll be joining the Inspire circle of do. Good Stitches (which I’m really looking forward to) and trying my best to keep up with the Pile O’Fabric Skill Builder Block of the Month in hopes of learning how to sew curves at the very least. And ideally, I’ll be a little bit better at keeping up with this blog during the spring semester than I was this fall.

I hope everyone is having a happy and relaxing holiday season! Things are going well here in Brooklyn, and I finally have enough space to breathe, and to post again. I’ve missed it.

I’ve been in an absolute rush all fall, between a full course load and finishing my MA thesis and a part-time assistantship (and the 12-hr/week commute doesn’t really help, though I read on the train). There just wasn’t much space for quilting, or for much of anything else, really: I sort of disappeared for a while there from all aspects of my life other than SCHOOL.

Thankfully the semester is now over, and all I have to do between now and January 13th is finish editing my MA thesis. (Hush, you. That totally counts as a vacation.)

I did manage to get some knitting done, because it’s more portable than quilting, and socks fit well in my bag for those times when I’m just too tired to read for school while I’m on the subway. I made these socks for my mother for Christmas: 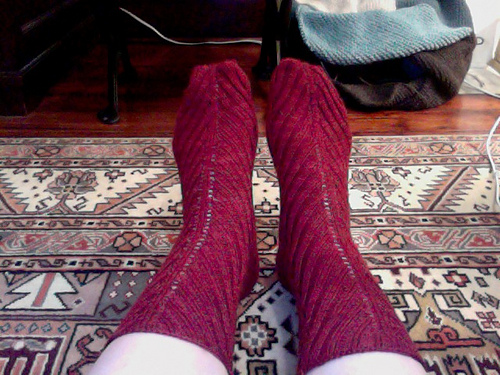 And since the semester has been over, I’ve been able to get a little more sewing in, which I’ll post about soon.

The fall semester has been kicking up into gear, so I’ve had less time to work on projects recently. It’s also influenced what I’ve been working on to a certain extent. That said, I’ve still gotten some things done!

Finished:
I made three notebook covers for classes, following Rachel’s tutorial on Stitched in Color. I’m going to make one more in yellow and red, to match the Plantagenet colors, for my class on the Angevin Empire. And this time, I’ll (hopefully!) remember to add a pocket before I sew it all together!

HST BoM QAL: some progress! I made the second July block & and my first of two August blocks.

-finish second August block (cut and partially pieced)
-fix botched May block already!
-start thinking about how to arrange the blocks & what to back the quilt with.

The more time I spend on the subway going to and from work/class, the more knitting I get done — I may have to take up hand-stitching things, if the majority of my crafting time continues to be on the subway.

Perk Me Up Bag: some progress.
I finished one side of the bag, which is a patchwork of the various fabrics, and I quilted it, because it’s a lot sturdier that way: I didn’t want to risk knitting needles poking their way through the bag and stabbing someone.
-iron interfacing to back of bag exterior and/or quilt it, too.
-attach pocket to back of bag exterior
-cut strap extender, strap and closure strap, attaching appropriate hardware
-sew lining together with internal zippered pocket in place
-attach lining to exterior pieces
-finish strap and etc.

Baby K’s Quilt: no progress since last week. This one is what’s laid out on my WiP cart right now, but I keep putting things on top of it — I should just get it done! There’s a bit left to work on.

Spinning: no progress since last week.
-Merino/yak continues to entice me, but I’m not watching much TV, so not much spinning is getting done. Perhaps I’ll watch a move with friends/family one night this week, to give myself some time off before things get crazy. That might be fun.

I actually got a good bit done! I re-organized, and now have my sewing machine set up on a table that’s at actual table-height, not coffee-table height. This is very exciting. :) The re-organization resulted in some stash culling: find the things I know I’ll never use here, in a de-stashing sale.

1) I’ve cut fabrics for another messenger bag, which will be a knitting bag for a friend. I’m using the Mabel pattern again, but I’ll be adding an interior dividing zipped pocket — wish me luck! I’ve never done this before, but I figure it can’t be impossible to do.

For the exterior, there was a panel print in this fat quarter pack that I simply couldn’t resist: it’s going to be an exterior pocket, so it’s visible.

The other side of the bag was going to be brown, but that’s boring: instead, I’m making a patchwork of these various prints:

The lining will be a light blue:

2) My downstairs neighbors just had a baby, so I’ve picked out a pattern for a baby quilt, and am challenging myself to make it entirely from stash.

I’ll be using the pattern written up by Audrey of Hot Pink Quilts in her Let’s Get Acquainted blog hop post. All I know so far is that I’m going to be using Kelly green (Kona) and the green Hello Pilgrim stripe for the borders, and pulling the little squares from stash.

Linking up to WIP Wednesday at Freshly Pieced, and to the Small Blog meet-up at Lily’s Quilts. If you’re stopping by for the first time, you might be interested in learning more about me, or in looking at my finished quilts. If you’re interested in any particular kind of project, check out the tags in the lower right sidebar.

This is a remarkably picture-poor post, largely because it’s a to-do-list of the various projects I have in progress right now. Never let it be said that I’m a monogamous crafter? Projects are arranged in (sort of) order of least-work-to-be-finished.

General To-Do List:
-Tape a large piece of batting up on the tops of my two really tall bookcases and pin things to it, in an attempt to create something that sort of resembles a design wall
-Clean crafting stuff off my desk so it’s actually usable for schoolwork.
-Likewise clear books out of crafting space so I can actually sew w/out moving piles of stuff.

Test-Drive Mabel Bag To-Do List:
-Be proud of inside pockets and the fact that the lining actually (mostly) fits inside the exterior of the bag.

-Attach strap and strap extender once bag hardware arrives in the mail
-Sew around the opening, matching lining to bag outsides
-Turn it inside out to end up rightside out & sew up lining bottom
-Iron (and maybe topstitch?) for a finished, professional look

Mini Dresden To-Do List:
-Back of mini Dresden quilt: alternating tumblers in a variety of fabrics across a brown background: figure out the right size of tumbler
-Finish the corner fans of the mini-Dresden quilt, and arrange so that they will look all right after binding
-Binding of mini Dresden quilt: probably in a darker brown, but possibly in a scrappy series of colors. I’m torn between wanting to make it more cheerful and wanting the focus really to snap to the middle medallions
-Quilt & appliqué!

-Re-jigger design to figure out yardage needed to make a double-bed quilt out of slightly smaller blocks
-Pick out sashing & binding fabric (next week, with L, hopefully!)
-Cut sashing
-Piece a scrappy border, alternating white and blue
-Piece entire top (ugh!)
-Figure out backing for the quilt (!?!?!)
-Sandwich, quilt, bind
-Give to mom on October 18

-Cut the black 1 1/2″ strips for the “frames”
-Order more Kelly green and cut green strips for “borders”
-Cut about a dozen more organizing cards, number all 36 of them from 1-36
-Start laying out all 36 blocks, figuring out which ones need to be oriented vertically and which horizontally
-Piece blocks
-Arrange blocks on (hopefully!) “design wall”
-Piece top & figure out backing and binding
-Baste, quilt, bind

Spinning To-Do List:
-Get cracking on that yarn for mom’s sweater. Finish it up by December, for a Christmas present.
-Spin exclusively from stash: maybe some merino/yak? Or the lovely greens from MA Sheep&Wool.

I’ve joined two charm square swaps. The first is the the Let’s Get Acquainted I-SPY Swap, for which I’m sending two sets of blocks, one of moons and stars and the other of bananas. (If you’re interested, it’s still looking for more people!) I’m planning on making a quilt to donate to a children’s charity with the squares I get back from this swap.

Then I stopped by my local fabric store today to pick up some yellow and brown dotted fabrics for the 3×6 Fabric Swap. Now I just need to pick up a yellow solid (all the ones at the local store were greenish, or too orange for my taste) and cut it and the brown and I’ll be ready to send off all the charm squares. Now to find envelopes to enclose that will hold the right number of charm squares so I can figure out return postage. :)

While I was at the local fabric store, I noticed that they’d gotten a new shade of green in: Kona’s Kelly green. I looked at it and it looked like I’d prefer it to Clover for the background of my Kitchen Window quilt: it’s a more sober tone, and I think it competes a little less with the prints. It presents less of a contrast with the black, too, which I think I like. Here’s a quick photograph of the two of them side-by-side:

I’ve just started a handbag using the pattern Mabel, by Jenna Lou Designs, which I found through Purse Palooza 2012 on Sew Sweetness. I’m going to try to make an altered one with an internal dividing zipped pocket, so I figured I should make one following the pattern as written, first. I’m using scraps from the Mixtape Quilt. They ended up being cut sort of sideways, so the birds are all facing the wrong direction, but I think that will be all right in the end. It’s a good test case for getting used to working with interfacing, which I have not used before.

Of course, I only ordered the magnetic snaps and strap hardware today, so I’ve pretty much gotten as far as I’m going to get until it arrives. Maybe I’ll work on putting in an interior zipped pocket on one side and appliqued, open pockets on the other, just so the bag will hold something useful and not be an enormous black hole of stuff. It’s mostly a test case for a potential knitting bag, so I think I’ll try out pockets from this knitting bag, putting the outside pockets on the lining of the Mabel bag. We’ll see how it all works out!

Finally, I finished my red monkey socks this week. They ended up being too small for me, and there wasn’t enough yarn to finish them even if the ankles hadn’t been too narrow, so they’ll be a gift for a friend.

The friend I’ll be giving the socks to is further along in her PhD program than I am, and she’s writing her thesis, so we meet about once a week and study together. It’s a really good system for me, because having someone else around helps me focus and keeps me from spending too much time surfing the web, or knitting or quilting or otherwise putzing around. It works surprisingly well.

I’ll cast on a new pair of socks this weekend or early next week, using a Malabrigo sock in the “Persia” colorway. I’m not sure about the pattern yet: something with some stretch to it, and an easily memorizable repeat.